Remember this picture from my birthday ride last fall? 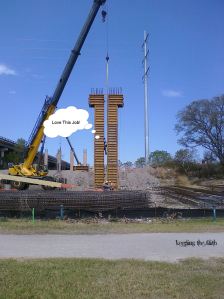 There was a [brave] guy braced between the two halves about 30 feet off the ground, supporting his weight with his feet, bolting the sides of the form in place while it dangles from the crane over his head.  I went riding today, and this is what it looks like now. 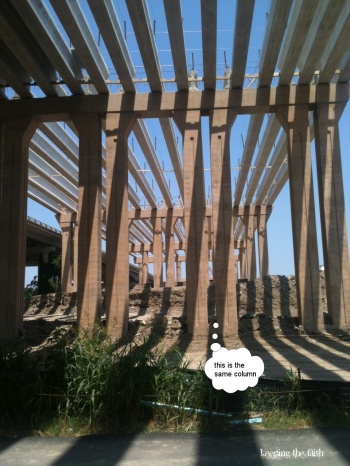 Goals? First, let’s talk about the overall goal:  the end number.  I have become increasingly frustrated with my ongoing efforts to lose the last few pounds.  I’ve maintained this weight plus or minus a few pounds for almost a year now.  I’m not willing to starve, let up on my exercise or give up weightlifting just to get down to the number that Weight Watchers says I am supposed to be without consideration of my age, fitness level and mental stability. I’m at my ‘goal’ dress pant size, and have been for a while.   Heck.  I even brought a note from my Doctor to WW stating that my body fat is in a good range, my bones are very dense (no osteoporosis for me!), that my muscle mass is in the high range and that my weight is Just Right Thank You Very Much.  The lady at weigh in basically said “That’s nice Sweetie.  You still have 10 pounds to go.”  So. I said goodbye to WW, and declared myself to be at goal.  I’m good with maintenance.

My goals are going to remain the same from now on.  I’ll just provide a weekly update!

I’m linking up in the Ready for Summer Challenge – come join the fun!

Say Goodbye to things you need to say goodbye to.  Keep the Faith.

3 thoughts on “Midweek – May 9 – Construction Update and Challenge Stats”