praying for –  Gordon, who went home to heaven Friday night.  His death was not unexpected, as he’s been suffering from renal and congestive heart failure for a long while. As his condition deteriorated, Jane called us all in to visit once more.  The grandkids even snuck Fonzy, Gordon’s dog, into the hospital for one last snuggle! On Thursday evening Gordon told Jane that he was too tired and too sick to stand on the edge for much longer, and that it was time for him to make the jump. They made the decision together to stop extraordinary measures, and transferred into hospice.

Praying for Jane, for comfort in the coming weeksmonths as she grieves.  She and Gordon have been married for almost sixty years.

Praying for their family and for my own.   Gordon’s death is the first one in our lives that my children have been old enough to really understand and grieve.

Gordon and Jane are dear, dear family friends; we’ve known them since before we were married.  They are the parents of my husband’s best friend Bill, who died from brain cancer thirteen years ago. Our families are intertwined, bound by years of friendship and sealed with decades of shared laughter, tears and prayer.  Our kids have called them Nana Jane and Papa Gordon since they were babies. I remember when the girls were old enough to start puzzling out the intricacies of family trees.  They were really surprised to learn that not everyone has three sets of grandparents and extra ‘cousins’! For Mr. Pea and me, Gordon and Jane have been an incredible, loving example of the sacrament of marriage. 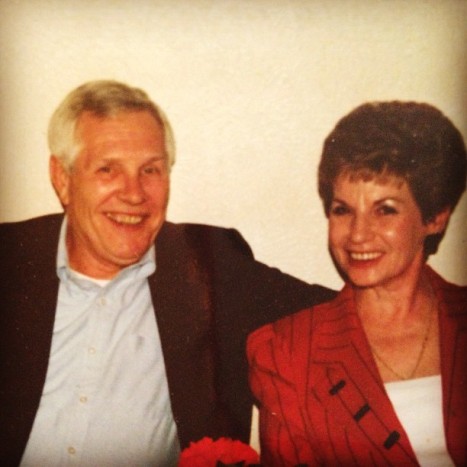 Record the Minutes. Keep the Faith.