Skip to content
I’ve been sharing stories with Hillary over at The Other Mama. (Note – Hillary is adorable. I want to be her.) Anyhoo, we were sharing advice about how to clean crayon marks off of walls and out of dryers, and the Toad Tale was recalled.

Since I’ve already been tossing around ideas in my head to keep myslef diligent about posting to the blog (“Flashback Friday” is one of those ideas!) I’ll dive right in and share a Moment in Parenting Four Fab Kids.

Ahem. The Toad Story in all Its Gory Detail….don’t read if you’re squeamish. 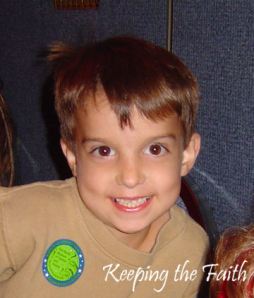 My youngest son has always had a propensity for stashing stuff in his pockets. From the time he was big enough to stuff those chubby little fingers into a pocket, his pockets have been an unending source of unusual things – sprockets, odd inkpen parts, legos, nuts, bolts, acorns, matchbox cars, pieces of string, contraband gum and candy, snacks for later, dogfood kibble, screwdrivers and wrenches, sunglasses, homework, spare shirts, balls, transformers, trading cards…all the trappings of little-boyhood. The fact that I thought cargo pants with those big patchy pockets were just too cute when he was little didn’t help with the pocket stuffing situation.

My youngest son also liked bugs and creepy crawlies, and tended to stuff THOSE in his pockets as well, regardless of their willingness to be carried along. I’ve found geckos, lizards, mice, snakes and innumerable unidentified insects in his pockets as I’ve prepped clothing for the wash cycle over the years. Three summers ago, there was toad in the cargo pocket, and I missed it on the way into the washing machine. Toads are definitely not wash and wear. The poor thing probably made it through the wash cycle, since we have a front loader that uses a minimum amount of water. The spin cycle, however, proved to be too much for his warty little self, and all his innards sort of came out his mouth. Gross. Youngest son and his older brother were amazed and impressed with the array of toad organs, and spent a long time examining them while I tried to be nonchalant, pretending that I was not actually allowing my sons to poke around in toad guts. (Honestly, how ofen do little boys get an opportunity to see the inside of a toad out side of high school biology lab?)

We buried Mr. Toad in the back yard, and I washed the clothes all over again.