A big shout out to Hillary over at The Other Mama.  This is her very first Friday Favorites Blog Carnival, and I’m so tickled to have been asked to participate!  Hop over there and read her blog until tears of laughter stream down your face.  Seriously.

Spring is starting to show her face here in North Texas.  With the 67 degree temperatures today, it’s hard to believe that there was actually snow on the ground two weeks ago!  Really, there was!  I have pictures to prove it. My children, who declared themselves too mature for mere snowmen, actually built an igloo.  Yes, an igloo.  They used plastic bins to shape the blocks and a sewer manhole insert to form the arched top.  [ed. note – the insert was CLEAN, a contractor’s submittal that I had in my office.  I brought it home thinking that it would make a pretty decent saucer sled.)  Ordinarily I would post a plethora of pictures of their amazing structure, however…those shots would be on Teen Daughter#2’s camera, which is presently in her (designer) handbag on the other side of town.

I digress – I’m supposed to be posting about my favorite thing.  Honestly, I have thousands and thousands of favorite things.  I like it all!  Chocolate, knitting, books, making jewelry, sparkly things, tech toys, gardening, cooking, purple, sewing, Henri Bendel Amber candles, blogging, photography, spaghetti and meatballs! I am the Queen.of.Everything.  Beyond the ‘things’, though, are my favorite people in the entire world…My kids. (Hubby, too, but he’s camera shy!) 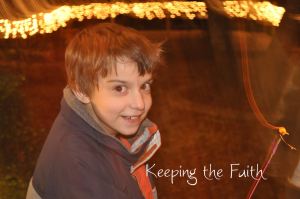 Almost Teen Son#2 – playing with fire
Yeah, he’s playing with fire in this picture.* That’s a sparkler swinging by his face. He’s also not standing still.  He was nearly impossible to capture on film until I got a new camera.  It has the ability to snap the shutter three times a second, so I occasionally catch this boy in motion. I still have better luck with photos like this, though. 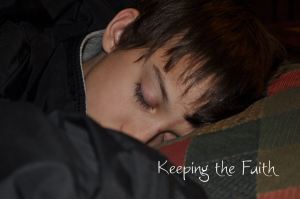 *This kid also runs with scissors, frequently tromps his older brother at the pool table playing Nine Ball, burns holes in paper with a magnifying glass, knows how to use a big ‘ole knife to clean fish, plays with modeling glue, can whoop our frannies playing ProStreet (or any other game!) on the wii,  uses a soldering iron to connect electrical stuff, and has built his own treehouse. UP in the tree.  And it isn’t falling down. And he plays the drums.  He’s our wild child. He will never be allowed to drive.

15 thoughts on “Friday Favorites – My Teens”

Leave a Reply to Mary @ Giving Up On Perfect Cancel reply